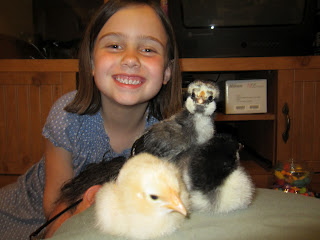 We've had our chicks for 2 weeks now.  They're losing their downy feathers, and are getting the real deal in now.  They're little personalities are starting to show.


Alice is sweet, but shy.  She prefers the company of chickens over humans, and cheeps very loudly when she can't see the other two.  Once she's been held for a while, she snuggles right in and quietly observes.


Hazel is friendly.  She was the first to get a little air under her wings, and fly to my knee to some cuddling.  I think she likes Henry more than any other human, and he loves her back often cooing back to her peeps.

Penny has me worried.  She is showing physical and behavioral signs of becoming a rooster.  Hens have combs and wattles, but they usually don't come in as early.  Fingers crossed, pals.  If Penny is really Paulie, he'll have to move out.  Which might break my heart.  This chick is the boldest: s/he is the first to check out something new.  S/he is very sweet, and likes to have her/his back rubbed.  We should know for sure in about 6 weeks.

Jim and I have finalized the coop plans and will start buying and construction this weekend.
Posted by apt at 12:37 PM

I didn't know that chicks would cuddle. Neat.