13.  Tomorrow our trio of 2 legged pets will be 13 weeks old.  Somewhere along the way,   They were born on April 23, 4 days before my birthday.  I'm checking and double checking.  On average, hens start laying eggs at 20 weeks.  I don't want to stand by the coop tapping my toe too early.  Seven more weeks, ladies....

The chickens spent their first night in the coop last night.  It was kind of like sending them to camp.  I know they're safe, and they'll love it there, but I'm still a little worried about them.

Right now, in our backyard Henry is playing in the sandbox, Willa is walking around, carrying Alice like a baby, the other 2 chickens are poking around looking for bugs, and the soaker hose is getting our veggies some needed water.

I came in to refill my coffee mug, and couldn't resist recording this little moment of bliss.

It's been a few weeks since the last chicken report.  The truth is I don't see much difference between an 8 week old chicken and and 11 week chicken.  So, they pretty much look the same.

There have been major advances in the coop construction. There are 4 walls now.  Our trio of feathered pals should be evicted from the basement by the weekend - though throwing them from a nice 70 degree basement to 90+ degrees seems kind of cruel.*

The coop news is huge.  First, because well meaning folks keep asking if it's done.  They do not know the hours and sweat put into this.  It's not just slapped together.  We need to think about ventilation, and warmth, and raccoons, and mites.  There's a lot of caulk involved in keeping out mites.

Additionally, it is a fact that Mr. Sinki and I have brains wired in such a way that we do everything exactly the opposite from how it would be logical to the other.  Some might think this would be good for a physical project: the whole balance of strengths, right?  It is not.  Some might think it would be an opportunity to learn another style and practice communication.  Ha ha.  That's what I thought when we redid the kitchen.  No.  Now we laugh and hug each other while keeping our other unhelpful thoughts to ourselves and pray that we're done soon.

So... the coop being almost done is awesome.  There will be a coop christening party in August.  You should come.


* Random fact for you: chickens pant like dogs when they're hot.
Posted by apt at 1:54 PM No comments:

This evening we had a picnic at Townsend Park.  The kids and I took our shoes off and walked in the rocky creek.  I got in my walking over some rocks.  They got in by golmphing through the muck.  Ew.  They had a blast.  At one point, I walked behind Henry and overheard him giving himself his pep talk with every step: "I think you can do this, myself.  I think you can do this, myself..." 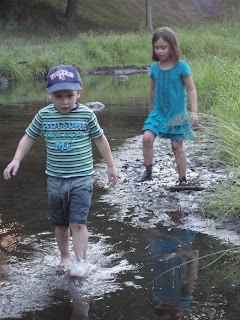 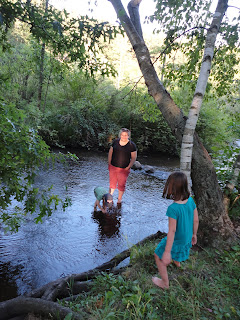 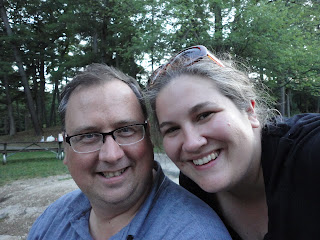