Lights in the Night

So, I've already admitted that I openly cry at church a lot.  I'm going further.
I cry a lot at the strangest places.  Do I cry at weddings?  Well, duh... I have tear ducts.  But I cry at parades, friends.  You get floats and clowns and marching bands down a street, and I'll be on the curb, wiping my cheek with the back of my hand.  I think my eyes leak when I see people coming together.

Tonight in my city, every parking ramp was full at 7:30 tonight.  The streets were clogged by families, couples, groups of happy people who were there to explore ArtPrize.  Willa and I were anxiously driving up and down streets looking for one spot that would hold the tiny Ford Focus.  We ended up across the river, and blocks away from our end destination.  We had to leave Jim and Henry at home because Henry was being a monster, and Jim was taking one for the team.

Willa and I walked down Bridge street, knowing we would be too late to get our own paper lantern to release.  We got to the river and stopped in our tracks, gasping.  It was stunning.  We sat on the lawn and just watched for a while:

And then we got closer.  We came to a tent where they had been passing out lanterns, but it was empty.  Willa's face fell.  We stopped for a quick pep talk, and then went on to soak up the beauty.  We stopped at a clearing at the park, and watched people release theirs.  A mom was holding one, and getting ready to let it go.  I whispered, "would you mind if my daughter just touched it while you let it go?"  She smiled, "we have one for her."
A complete stranger gave Willa an extra lantern she had in her stroller.    Willa's eyes grew wide as the woman lit it for us, and then handed it to me.  I smiled at the woman with tears in my eyes.  She instantly started crying, too.
We were 2 people in a giant crowd.
Willa made a wish and let the lantern go.  We watched it go over the trees that line the river.  We watched it sail over the river.  Up, and up, and up, joining with the others until we couldn't distinguish "ours" anymore.  I think it was more poignant for me, as it was never our lantern to begin with.  We held hands in silence, watching, and feeling the cohesion of the moment.
In all, over 20,000 lanterns were released tonight over the span of 30 minutes.  It was stunning. 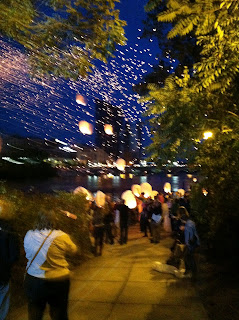 ﻿
The crowd was enormous, and Willa and I walked the grounds of the Ford Museum to allow foot and car traffic to thin out.  We stood at the reflection pool, and she asked me for a penny.  I dug out a penny for her and a quarter for me.  We tossed them in.  I don't know what Willa's second wish was for that night, but I wished that our generous stranger found joy in her act, and that she would find some lovely surprise in people tomorrow.
Posted by apt at 10:23 PM

I cried last night, too, and I cried reading your story. I hope you and Willa get all your wishes.

I just wrote my blog post about this night and the generous people who gave strangers their laterns. I didn't realize Willa was part of this story. So very sweet!

I think this was one of the most amazing nights of my life.