"Mom," she said, looking very serious, "I think my brain smells like rainbows."

In other news, I'm in the middle of an intense/rapid job application process with the State of MI. Fingers crossed pals, okay?
Posted by apt at 6:17 PM 3 comments:

She got my teeth, and his humor

Willa has started telling jokes. Her own. They are long, and involve whatever is in the room that her darting eyes rest upon. They end with her cracking herself up, and me cursing the fact that genetics failed. Clearly, she's inherited her dad's sense of humor. Want an example?

And I have to play along. Even though I know that we're not going to land anywhere near making sense. So, I say, "I don't know what did the monkey say to the ball?"

This part she doesn't have to think about. Because of course the monkey would say the following to the ball: "You bounce up and down, and I'll go up in this tree, and pick a banana. And then I'll eat it."

This is very funny to her. She laughs so hard, her cheeks get red, her eyes get teary. And her look of accomplishment is so endearing and sweetly ridiculous, I crack up too.

I am pretty sure that all kids tell these kinds of jokes on their own. It's fascinating to watch someone learn humor and how to work a tough room.
Posted by apt at 11:12 PM No comments:

The inevitable fall of Winter

When going down side streets, I've purposefully been hugging the curb. I've been stomping on the edges of snowbanks. I've had a tiny glint of evil glee in my eye for the past week.
I know that there's snow in the 5 day forecast, and I know it's only February. But LOOK. 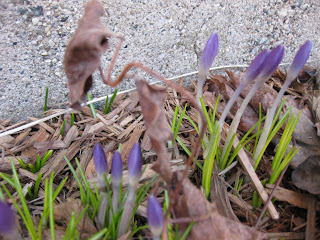 Crocus reminds us that - even when the once "pretty snow"* gets grey and crusty - nature is still doing its job in the hard, cold ground. This picture was taken today. The kids and I are sick, and ventured out for a walk around the house, and then down the street 3 houses. That wore us out, but there was sun, and the sound of water trickling into storm sewers, and flower buds. Ah, the healing power of hope...

First, sorry for the little bit of sibling yelling there. It's just kind of part of their script. And don't be fooled by Willa's very pathetic look. She got her solo earlier.
Second, I am not driving here.
Finally. Kid's got some pipes, eh?
Posted by apt at 12:01 AM 1 comment:

I have become a chronic liar to my children.
Willa and I just finished reading "Charlie and the Chocolate Factory." While at Target, she saw the movie (the new version*) on sale. $5. Okay. So... we watched it, Henry joined us.
Tonight at dinner I proceeded to tell my kids how I used to be an Oompa Loompa. I told them that I was in charge of the coconut room where we had monkeys wearing backpacks scaling the trees to harvest the fruit. And then elephants would crack the coconuts on large rocks. Then hermit crabs would scrape the fruit from the shell.
Gracious their eyes were huge.
I can't help it. It's fun to unlock their imagination. Also, it cracks me up that they might believe it. I'll set them straight... someday.


*This version didn't have creepy Oompa Loompas, and the boat in the tunnel scene didn't give me the creeps, but I like Gene Wilder better as Willy Wonka better.
Posted by apt at 10:17 PM 2 comments: