The walk in the woods.

"Big tree! Baby tree! Shhh... deer... sleepin'." My hiking companion was excited to be out on the trail with me this morning. He pointed out items of interest: "LURK mama! LEAF!"

Henry and I went to the Calvin Nature Preserve after dropping Willa off at preschool. He walked fine until we went over a boardwalk. Right now, walking over boards that he can see between makes him uneasy, so he spent the first 10 minutes on my shoulders, patting my cheeks with excitement whenever he heard a bird.

Then he got down and walked. And walked. He did great! We saw ducks and turtles and a lot of chipmunks. At the end of the trail we entered the interpretive center and then the butterfly "house." There was a group of people in there, and a sweet kid put the butterfly that had been hanging out on his arm, right on Henry's. Henry stared at it, amazed, until it moved a whispery foot. He cried until the sharer reclaimed his butterfly.

We had such a great time, we went again after picking Willa up.
Posted by apt at 10:54 PM No comments:

Last week, I was at the side of the house, examining the progress of our dill and chamomile. It was evening, the kids were in the bath. Jim was watching them. I thought.

I heard the screen door slam, and heard small footfalls. Soon after, a sudsy, giggling, and quite naked Henry was hugging me.
Posted by apt at 10:38 PM 1 comment:

Last week I packed the kids into the car, got them buckled in, and joked that no one ever buckled me in.

Willa told me it was because I was a grown up. And then asked if she would ever be as old as I am. A quick note here: not "as old" as in "mom, you are very, very old..." but just wondering if we'd ever be the same age.

And then Willa said, "mom [long pause] when you die, I'll always remember you in my heart."
My eyes welled, and I couldn't speak for a minute. I made a comment about how I wasn't planning on that happening for a long, long time.

I was grateful for her statement for two reasons:
1) Awwww, right?
2) Willa now realizes, I think, that I am likely to die before her. She had been asking questions about how I would feel when she died, and I had no idea how to face that head on, as I didn't want to keep her up at night worried about me dying the next day.

She is, as I think I've written here before, somewhat morbidly fascinated with death. She interrupts conversations randomly with a sad face, a sigh, and a statement about missing her great grandma (who died when Willa was only 20 months old). I've had some concerns, but I think it's been a long, but now passing, phase.

There have been some comments worth recording, though:

Here's hoping this phase keeps her away from the Goth or EMO or whatever style requires a lot of black and eye makeup when she gets older. I'm pretty sure that would kill Jim.
Posted by apt at 10:30 PM 3 comments:

Have I written here that I'm applying for grad school? I am. Central Michigan University has a counseling program, and I'd like to be in it.


Part of the application process is taking the Miller Analogies Test. Remember hand is to arm, as foot is to ____? Ratchet those up a bit in the thinking department, do 120 of them, progressing in difficulty, and that was my Saturday at 9:30.


I'm a huge crossword geek who loves puzzles and figuring things out. But a straight 60 minutes of these on the computer left me itching to jump up and stretch at about minute 42.


I finished, and got a prelim. score back. Friends, I kicked Analogy ass.

And after we were all done, I asked the somewhat familiar guy next to me his name. Out of the 7 people taking the test at that location that day, I was sitting next to someone I graduated from high school with. 150 miles and 17 years (gulp) ago.
Posted by apt at 10:51 PM 5 comments:

I told y'all about the train joke here.

On the road, and knowing we were track-bound, I pulled my camera out, and slyly captured this:

It gets tricky when both kids are in back. Willa doesn't miss a chance to say it, Henry makes up opportunities. I'm trying to teach them another joke.

Speaking of prayers, I have a few related to Henry who:

- refuses to hold hands and pray at dinner lately. "No, 'hi God.'" "No, 'thank you.'" "No, 'amen.'" followed immediately by "Aaaaaaa-men."
- ate 1/2 of Jim's chicken breast at dinner tonight.
- seems to - at random times throughout the day - have most of his rational brain missing. We've hit the tantrums big time. Willa. She had tantrums. Hers, at the time, seemed Grand Canyon big. Henry sports a tantrum the size of Jupiter AND its 9 moons. Big, epic, random meltdowns.

and some thank you prayers:
- dude has used the potty 3 days in a row, his own doing.
- he saw a photo of me and said, "pretty mommy."
- this laugh of his. BIG, from his appendix, eyebrows dancing...

Henry, I was just joking at dinner when I told dad you were likely to grow up to be a carnivore, evangelical preacher, republican just to spite me.
Posted by apt at 9:10 PM No comments: 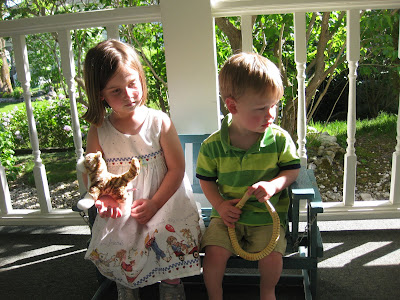 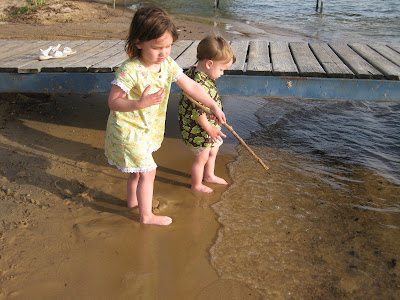 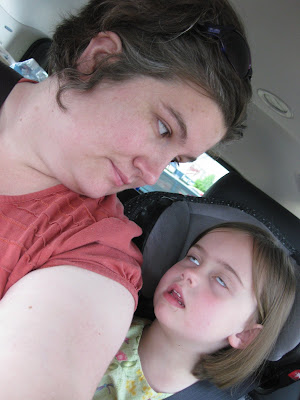 Jim looked at this photo, laughed, and said, "this photo will define your relationship with her for the next 20 years." Also, pals! I got my hair cut. SUPER SHORT! And while friend Erin did a great job, I have a hard time managing it without the aid of sunglasses or a headband. 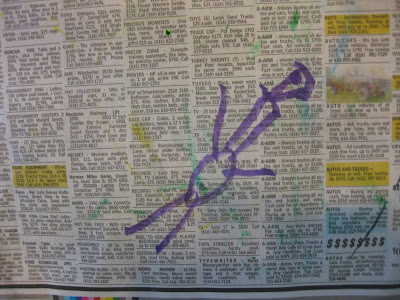 This is Willa's drawing. She says that's what God looks like. This was before she decided to agree with my feeling that little bits of God are all around her in the form of people, animals, plants, etc that you love.
We pray every night at our table. Have I mentioned that here yet? We hold hands, and say thanks God, and ask for any help we may be looking for. Every day Willa starts hers, "Thank you God, for this beautiful day." Even if it's stormy or chilly or too hot. Every day is beautiful. And every day she includes, "and thank you for the birds." God is in the goldfinches that visit our bird feeder several times a day. Thank you, God.

Willa had a tadpole. We got the whole kit n' caboodle for her birthday. Fiona arrived about a month ago, and she happily lived until Saturday morning.

Know what else happened over the weekend? Really great things: Jim came home from being work-gone for a while. We went to Festival downtown: all 3 days. We caught up with Keri for lunch one afternoon. We met our pals the Groens at a park on a fantastic evening.

Also, Greta the dog found a rabbit den on the lawn. I didn't know until I saw Greta with a baby bunny in her mouth. She ate it. And then another before I could grab her. It was truly horrifying. Luckily the kids didn't see this. They did however see the remaining babies.
In the morning, I knew momma rabbit never returned to the den that night, which meant the babies were hungry. So, I scooped up the ones that were still alive, placed them in a fleece lined bucket and got them something to eat until we could bring them to the rescue lady.

I went to feed Henry's fish. One was dead.

I took a deep breath and counted to 10.

I dreaded telling Willa that Fiona died. She doted over the frog-to-be.

While Henry napped, I pulled Willa to my lap and told her, "I have some sad news to share..."

I started to cry. Friends, I couldn't stop. My daughter was crushed. My dog was a bunny eater, Henry refused to eat his lunch, Jim was gone... I cried and cried.

And then she said, "mom? Maybe we can order 2 more from California now?"

We buried Fiona and Mandarin the fish in a shared grave under the white peony yesterday. We'll be putting the Frog Habitat in storage for a while. At least until I shake that Elmyra feeling.*

* You know... Elmyra from Tiny Toons. Wikipedia says this about her: Elmyra is quite young and obsessed with animals and cute things (which is probably why she works as a nurse at Acme Looniversity), even chasing after animals whom she knows are her classmates at Acme Looniversity, obliviously causing great discomfort or serious injury to potential pets from her overenthusiastic affection and complete lack of even the most rudimentary knowledge of pet care.
Posted by apt at 10:20 PM 1 comment: