A few days ago the four of us were at Mr. Sinki's sister's birthday party, which also happened to be their annual pig roast (whoooo! vegetarian at the pig roast!). It was a lot of fun to watch Willa and Henry run around with their cousins, and enjoy the trampoline and cake and glow necklaces. It was fun to watch them play with kids they didn't know.

While they did this, I met new people. There was the Polish woman who loves to shop and has a new boxer puppy. And the dad who was nervous as he took his young son to get a hair cut with very specific written instructions from his wife.

And then there was this woman who I kind of enjoyed talking to, but was - way in the back of my mind - irritated with her at the same time. It wasn't until doing some party debrief with Jim that I figured out why. She has 2 kids that are roughly my kids' ages. One started school last year, and they opted to send their child to an excellent school in an outside district using the School of Choice option. Fine, okay, good for them. But then she kept talking: "you should move to our Riverside Park neighborhood; it's wonderful." And, "you should send your daughter to X school district, it's terrific." Got it. But she kept going, and I started thinking she thought she was the boss of me. And she is not.

I get that everyone does their own thing. She's happy. Thumbs up. But she was so darn... smug. "Don't move out of the city! Send your kids to the suburbs for school!" I tried telling her that it was important to us that we live in the community (dare I say neighborhood) where our kids go to school without starting a debate. "We love living downtown, we bike downtown!"

Sigh. She was smug, but it's interesting when you meet someone who shines a spotlight on something you're wrestling with, isn't it?

I love living in the city of Grand Rapids. I love the idea of public education, and the democracy that comes with it. Both the city and public education have been idealized in my head and heart, and I'm aware of that.

That last one seems best for us. But strangers at parties can't seem to let that go.

For another day: where, ideally, will this less cramped house with better schools be? I dunno. Today Willa and I pet baby goats and chickens at the zoo. This started daydreams of a house with more space inside and out. Three hens and two goats. A huge garden... Fruit trees...

What do you think? Could Camp Sinki turn into Sinki Farms?
Posted by apt at 11:00 PM 3 comments:

Things look different here, don't they? Yeah... the site changed the design to a desert-scape, and I couldn't find the original template again, so now we're all vernal and green.

Yesterday we all got in the car, got out at Townsend Park, and ate a picnic lunch while listening to some raptor baby squawking for lunch. We also spent time wadding in a stream catching minnows, playing Uno on a blanket, and walking in the woods. Henry and I climbed a steep slope. Willa spotted a Butler's garter snake. Jim pointed out mole tunnels.

Then we drove north more and looked at Wabasis Park. We ate dinner on the deck of the Clifford Lake Inn (which is said to be haunted). We ended the day with an ice cream stop on the way back home.

When the car was unpacked, Willa and I caught fireflies in the front yard.

On Sunday, I finished my school paper at about 3 pm. Jim took the kids to his parents' house for swimming and celebrating Father's Day with his family. I joined them, and got the run down on what the kids picked out for Grandpa for a gift. They got some sauces for ice cream. And some toys for the pool. And milk. Henry demanded that milk be gifted to grandpa. Why? "Because it's funny."
Anyhow, we swam. And swam. Then we went to dinner, and then a walk at a park that is less than a mile away from our house and full of frogs and deer. I caught a frog, Willa held it. Then Willa, my child freaks out when she sees an ant caught a frog.
Then this happened:

And then we went home.

I'm so lucky to be parenting these kids with Jim as a partner. He is tough when I am weak. He is gentle with them when I am ready to pack them up for the Gypsies. He hides with me behind a shut door to laugh our fool heads off over the zany things these to miracles/monsters do and say.
Posted by apt at 12:54 PM 4 comments: 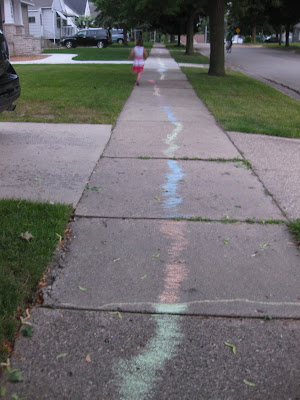 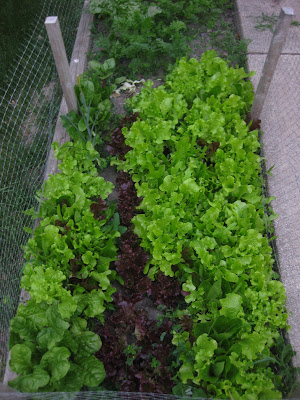 We at Camp Sinki are in full summer mode. Look at that chalk line! A cluster of 5 kids made that, stretching 4 houses. And who needs some lettuce? Mmm....

Doesn't this look like a sweet lil' neighborhood? Buy our house now, and get all the produce that ripens later. Yup, our house is still on the market. It's been less than 2 months, and we've had 7 (I think) showings. Not bad. Our realtor said that June has been slow for the whole local market, and not just our home.

We did find a house that we loved. So much that I actually had daydreams about our life there. The house had 4 bedrooms and more than one bathroom! There was a garage, and a huge pole barn, and a little guest house. I was in the middle of thinking about having a flock of three hens and a "play room" of my own for reading or sewing or not having to hear "MOM!" every minute of the day when I got an email from our realtor saying that it was priced so low there were 4 offers in the first three days, and there was already a contract. Sigh... did I tell you that behind the huge backyard was a city park? I know, I know... we mourned a little. But, onward!

I just finished a paper and emailed it... 2 hours before the deadline. I know that my tendency towards procrastination drove you up the wall when I was in high school. I promise, this time it wasn't my fault. We had only 24 hours to write up 2 sizable reflection papers.

I wanted to let you know that I'm thinking of you today. I'll call you later, but wanted to get something down here.

I was remembering today when I was young, and the Tigers were in the pennant race. A lot of the games ran much later than my bed time. You and I worked out a system where, if I came into the bathroom in the morning and found 2 toothbrushes on the counter, they won. If there was only 1, they lost. Funny memory, eh?

I want to thank you for humoring me in my youth - I know now it would have also made sense to leave a note or... just ask mom while getting ready for school. But you respected my idea, and maintained our secret system through the whole post season playoffs. I remember you tearing up a little when the Tigers won the whole deal that year. And going downtown in the van to be a part of the community celebration. Just being there.

Respect of new ideas, showing emotion, a sense of community, and a life-long dedication to the Tigers... yeah... I got those from my dad.

Now, I will go find my husband who has celebrated his day by taking the kids out of the house so that I could finish my school work. What a guy!
Posted by apt at 2:34 PM No comments:

Now I understand why there are very few great photos of me and my three siblings. 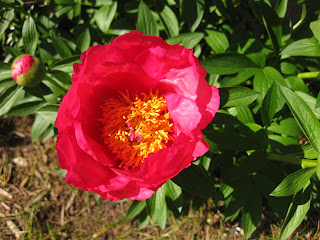 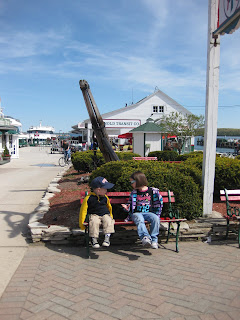 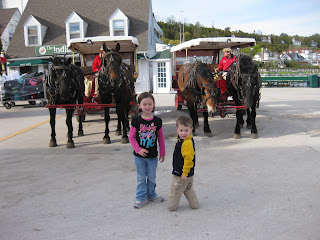 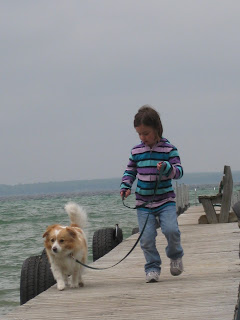 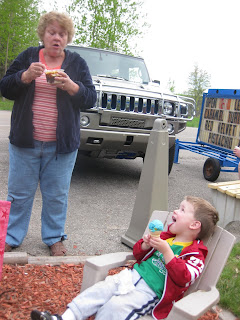 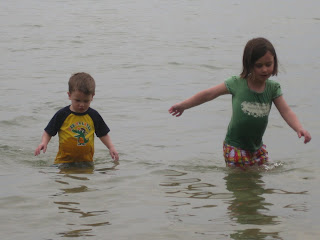 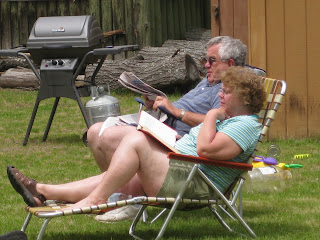 It's the middle of June?! What? It seems like just a few days ago that I took these. Here are the photos from our up north tour. In the photos, you'll see the kids at the Arnold docks and with some horses on Mackinac Island. Also, two best pals walking on the dock at Higgens Lake, Henry and Grandma at Nibbles (yay Nibbles!), our crazies IN a pretty chilly lake, and my mom and dad enjoying some down time up north. Also there's a pink peony from our garden. These bloomed just before the trip. So beautiful!
Posted by apt at 12:59 PM 2 comments:

Travels and a new friend

Last week, we spent some time roaming the top 1/3 of Michigan's mitten. Petoskey overnight (Hey, pals the Super 8 there has a 24 hour pool, a terrific breakfast, decent, clean rooms, and a beautiful view of the bay. All for under $60.), and then we dropped Jim off at the docks of Mackinaw City. The kids and I went to Higgens Lake where my parents let us hang out with them. The next morning, Jim was done with his annual conference, and we joined him on the island*. All of the Sinki's spent some time on the island, hiking the back paths, rather than spending much time in the disnified area nearer the docks. That's when this happened:


Cute lil' guy. The absolute nutjob who lives in my head and wants to bring every animal home with her was tempted to tuck baby squirrel into her sweatshirt pouch. The saner part of me won that arguement.

Please excuse the camera work: Jim took the video with Henry on his shoulders. Henry, as you might hear, is concerned about Jim standing on the grass. He has a new concern about poison ivy, and is certain that anything green is the dreaded allergen. You won't hear much from Willa. She was mostly breathless and hoping that the critter would go to her shoe next(so she might be able to hide it away in her pocket, and nurture it to adulthood and beyond). She is her mama's girl.

From the island, we drove south to the cottage again. We raked leaves, walked to the beautiful lake, had ice cream at Nibbles, took a long drive to find deer (found none - eerie), read, played Skip-bo, did puzzles, and I made the best campfire in the history of all campfires. The weather was weird, but the company was swell. Thanks (again and again) to my parents for letting us stay there. Photos to follow on another day.

* I must confess here that the ferry to the island terrifies me. I know - well, my brain does - that nothing is going to happen - but when it's just me and the kids heading to the island to meet Jim, I battle visions of the boat going down. Who will I put the life jacket on first? How will I manage to get both kids out of the boat when it goes underwater? Just typing this makes me realize that it's irrational. But most fears are, eh?
Posted by apt at 12:16 AM 1 comment: