do the hokey pokey, and turn yourself about...

When I fell asleep last night, everyone was in the right place. At 4, Willa came into our bed, whimpering about nightmares. Shortly after, Henry joined us too.
This morning, Jim woke up on the living room couch, Henry woke up on the floor next to Jim's side of the bed (did he roll off? I don't know), Willa woke up in our bed, and I woke up in Willa's bed upstairs.
It was like sleep Tetris over here. I think we're all pretty tired this afternoon.
Posted by apt at 10:41 AM 1 comment: 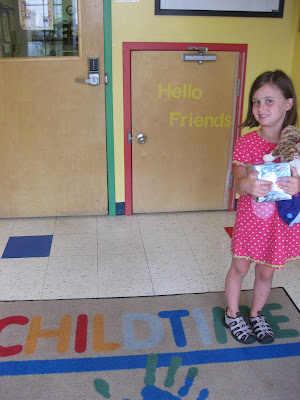 Exactly 5 years and 3 weeks ago, I left the building sniffling and wiping my eyes. It was my first day back to work after Willa's birth, and I had just left her in the arms of April, a woman I had met only twice before. My baby! This woman was now caring for my baby while I was at work.

Today, I left the building holding Willa's hand. I wiped my eyes, and sniffled. Here is my 5 year old on her last day at her daycare/preschool. Willa outlasted most of the teachers. There are only 2 other kids there who started near the time she did. I looked at them, remembering them as babies and sniffled. Even after losing my job, it was important to us to keep something constant in her life, and school was it.

I am so grateful to have found a place that I could bring her where I knew she was safe, learning, cared for, and having a great time.
Posted by apt at 3:55 PM 3 comments:

Do, Re, Me, according to Henry

Yesterday Henry, Willa, and I were singing in the pool. Following are Henry's lyrics to the end of Do Re Me.

... La, a note to follow directions
Te, a drink with jam and bread
and that brings us back to life
Posted by apt at 11:30 AM No comments:

Willa has a great memory, is very funny, and wants a chicken for a pet

Willa and I were lazily swimming in Jim's parents' pool. She was telling me that she'd like a pet bunny. And a bird. Also a few kitties, a frog, a third dog, some more fish. And, of course a chicken. This kid: she's soooo me. I should not be shocked. We've had ample warning. Take a look at this post from when she was 18 months old.

So, back to the pool. She and I started joking about pet giraffes and other ridiculous animals for pets. I share with her the following:

Me: When I was a little girl, we weren't allow to have any pets that had fur or feathers.
Willa: Why?
Me: Because of Uncle Bill's asthma. Fur and feathers would make it really hard for him to breathe. So, I decided one day that I would like a pet pig.
Willa: That's a good idea! They only have little hairs!
Me: I know, smart, eh? So, my mom said that if the city allowed a pet pig, she'd think about it. I found their number in the phone book and called to ask. Wasn't that brave, Willa? I was only eight years old.
Willa (with huge eyes): What happened?
Me: Well, when they answered, I asked, and they laughed and hung up on me. They thought it was a joke.

Pals, this really happened when I was little. I cried for the rest of the afternoon.

She and I laughed, and spent another hour playing in the water.

We went into the house to change back into clothes. When she was done, she picked up a toy telephone, and said, "hello, Grand Rapids? Can I please have a pet chicken?" And then she hung up, laughing.
Posted by apt at 1:51 PM 2 comments:

This has been in my drafts folder since July.  I'm publishing it in hopes that it shows up in the July archives.  I don't want to relive the day, and don't want to make others either.  I hope this just quietly slips into the archives.  Someday, I'll want to reflect on the awfulness.

Yesterday, during the time that most of our sidewalks are filled with kids doing chalk or bubbles or ridding their bikes, our street was silent. We heard sirens and helicopters outside. Inside, I had the kids in the basement for a while, and the news anchors were trying to make sense of a man killing 7 people he knew in two different homes. He drove downtown and opened fire. He drove on the highway with police chasing him. He took his car to the other side of the highway, endangering drivers there. He kicked his way into a random house and took three hostages. Eventually he let them all go and shot himself in his head. You can read a summary here.

It was chaos, and it was terrifying, it was maddening. He had the whole city hostage when we didn't know where he was. And then the whole city glued to reports when we knew he was trading the life of a hostage for Gatorade. "How will this end?" I asked my self, wringing my hands.

He was bi-polar, friends said, and not taking his medication. He had a significant criminal history.

My city, which recently made world-wide news from the lip dub was now on CNN for a very different scene on the street.
Posted by apt at 8:58 AM No comments: