- Alice and Hazel are now 18.5 weeks old.  Hazel looks like she's just about ready to lay her first egg, Alice has a while yet, I think.

- Willa starts 1st grade in a few days.  We're trying very hard to get back into he fall routine for the family.  It's hard right now, because...

- We just got back from vacation.  The Sinkis spent a week in the forests of Kentucky.  I know I always say photos to follow, and rarely post photos.  This time I mean it.

- We're also prepping to have Henry start a preschool/daycare program.  I'm starting my internship next week!

- We closed on the house refinance yesterday.

All of that, plus cramming in the last bits of summer.  Busy times!
Posted by apt at 7:23 PM No comments: 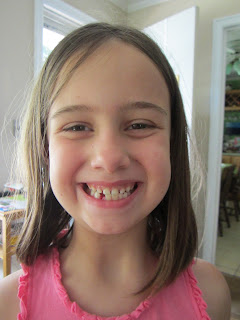 Willa lost her 3rd tooth today.  It was one that should have come out eons ago.  The root finally let go, and I had her tug a little.  When it came out, she looked shocked.  Standing there, with blood pooling, she wanted to call everyone she knew.  I made her wait a few minutes.  She called Jim, then my mom, then Jim's.  After that she ran outside to tell all of her neighborhood friends.
I was kind of excited, too.  Her other 2 teeth had the adult teeth pushing the babies out, so she never really had a gap.

*this was sitting in my drafts and for some reason wasn't published.
Posted by apt at 7:33 PM No comments:

Hazel and Alice are adjusting to life in the yard without Penny.  Alice - when under Penny's influence - used to run from people like a chicken with... well, her head intact.  This week, she's followed sweet Hazel's lead, and has decided that people are not the worst thing in the world.  She sat next to me in the lawn, and permitted me to pet her.  Now that she's not fleeing our hands, I can say that Alice has the softest feathers.

Penny, by the way, is living on a 30+ acre farm with a harem of more than 20 hens.  He gets to watch sheep, a cow, and her calf all day.  I asked his new caretaker for a report (he moved in with them on Friday).  Today she told me that he's a little nervous in the pen, so he keeps flying out of the electric fence, but grazes the whole day next to his soon to be pals.  Most of their chickens aren't very people familiar, but their 3 kids figured out today that Penny is sweet, and like to pet him.  Then she invited our family over for a bonfire next week.  So nice!

I'm deciding what to do with the Penny sized hole in our flock.  We might get 2 bantam chicks in the early spring.  We might pick up a hen in the fall.  I want no more than 4 chickens, and 2 isn't ideal.  In the meantime, it sounds like our 2 ladies and our former gentleman are all fairing well.

I confess that I miss Penny.  It's weird to look at the chickens and see black, black and white, but no buff.

I got out of bed, and looked out the window.  "Krrrraaaarrrararar."

There, bathed in the morning light that was streaming in the top, east-facing window of the the coop, was Penny.  Penny's golden feathers were fluffed up.  Penny's beak was in the air, and "Krrrraaaarrrararar."

Penny is a boy sounds like the chicken version of puberty Peter Brady.  Soon, he'll have a big boy crow, but today it's "Krrrraaaarrrararar."

That is the big 14 week update.  The kids and are are feeling a little sad.  I was hoping to be wrong all along, but, well, "Krrrraaaarrrararar."  I'm putting the word out to my chicken network (ha!  yeah, I have a chicken network).  Jim is in Indy, and he'll make phone calls tonight.  Penny has been lovely, and is my favorite of the trio, but he can't stay here.
Posted by apt at 10:26 AM 1 comment: