My dad and I* took the kids downtown on Thanksgiving and met Jim (who was working the Turkey Trot in the morning). The parade was fantastic. The kids were pretty riveted: 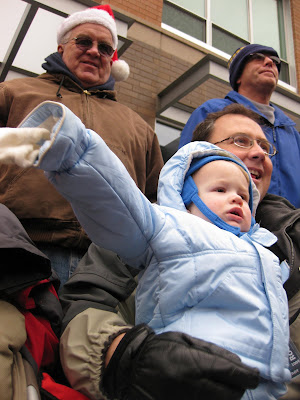 We were at the start of the parade. This means a lot of balloon spinning. That's some exciting stuff that you just can't understand unless you've been standing on Woodward for an hour in the cold, and have had the kumbya moment in a crowd of convincing a group of people dressed as cartoon characters to run in a circle, each gripping their line that connects to the giant balloon above them. It's pretty awesome.

So, Santa came (escorted by the Cousino High School marching band - I am an alum - yes, I do realize just how dorky this post is making me), children squealed, and then we booked it back to the parking lot, in hopes of beating traffic. I opened the door to the mini-van to load in the kids and found a duffel bag full of several copies of one cd. Uh... someone broke into my parents van and left cds and didn't take anything. **
And in order to keep things light and somewhat brief, I'll just say, uh... I hate it when stereotypes are realized. Some people don't go to "the city" because of crime. Thanks cd jerk, for perpetuating that. Bah.
Anyhow, the parade was fun. And then we got home, took several layers off and then went to see the marching band assembled in front of a neighbor's house. They won a raffle which entitled them to a 20 minute concert from the 100+ member band. A marching band? In the middle of a street? Playing Michael Jackson's "Thriller"? I'm there!
Even more entertaining was cousin time on Friday: 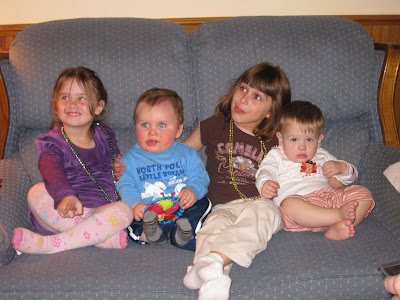 Sorry for the sideways video. I'm tired of trying to get it to rotate, and will try again later.
* My mom stayed home to continue recovering post-sinus/ear/respiratory infection. Later that day she hosted one of two - back to back - big dinners. Big, fun delicious, family diners, but hardly taking it easy on herself.
** Detroit: kinder and gentler post-Kwame.
Posted by apt at 11:01 PM

We're givers, here in Motown. (I must know--what was the CD? And did you check the cases for money or drugs or whatever?)

Also, you are the best mom ever for letting them out in the snow at what looks to be almost bedtime. Willa will remember that forever.

Have you purchased your reeds yet? SLA-H