Chickens legal downtown - if they're rubber 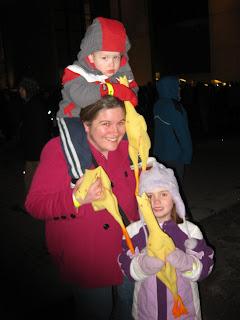 Grand Rapids is hosting a big, funny party this month. Laughfest is a 10 day festival that will raise funds for Gilda's club. There are big comedy names coming. And small ones. Music and events. It all got started tonight.
Were you wondering about the world record for the highest number of people to gather and toss rubber chickens in the air? As of tonight, it's 925. The kids and I got downtown and joined the crowd just in time. There was a countdown and then we launched them.
Because we stayed on the outer edge, our chickens did not travel far, and we brought them home. Walking back to the car, we told chicken jokes. "Why did the 3 chickens cross the road? Because we're carrying them."
Kids, someday you might be parents. now you can impress them by saying you are part of a world record breaking event. Cluck, cluck!
Posted by apt at 11:24 PM