So. We went up North and spent some time at my parents' cottage at Higgen's Lake. Mom, dad and I were chatting in the kitchen. After setting a watermelon on the back burner, she put a pot of water on the stove to boil (likely to kill the awful germs the Sinkis brought along).

A minute later, I said, "is it supposed to crackle like that?"
We chalked it up to water on the bottom of the pot.
And then was a... a scent. Because she was out of cooking at the cottage practice, mom had turned on the wrong burner. Resulting in: 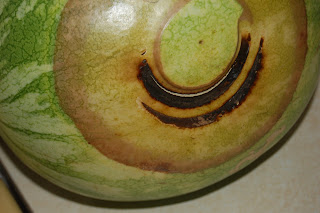 Yup, a branded watermelon
I mentioned that we were all horribly ill with a stomach bug. The malaise gave some of us "cottage fever" resulting in: 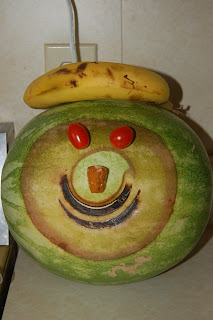